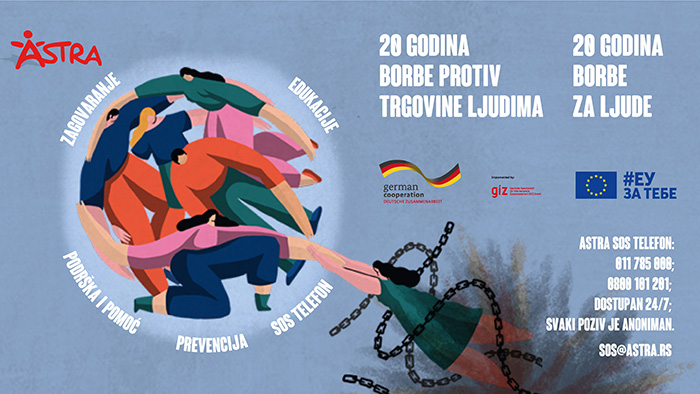 In the middle of June, ASTRA launched a campaign 20 YEARS  OF  FIGHTING  HUMAN  TRAFFICKING  −  20  YEARS  OF FIGHTING FOR PEOPLE, intended to highlight the role and achievements of the civil sector in the prevention and suppression of trafficking in human beings, to reiterate the importance and necessity of cross-sectoral cooperation as the only real and effective approach in tackling the problem and ensuring adequate treatment of victims inside and outside the system. The campaign also pointed out to the current deficiencies in cooperation between the civil sector and the institutions, and encouraged dialogue to overcome them. The campaign was conducted as part of the project “Improvement of space and opportunities for combating human trafficking”, supported by the European Union, and project “Solidary and united against  trafficking in human beings” supported by the German International Cooperation Agency (GIZ) under the Federal Ministry for Economic Cooperation and Development (BMZ).

From the beginning of October the campaign promotional activities had been implemented through ASTRA’s social networks and media appearances and reports. After that, pursuant to the current Covid restrictions, four screenings were organized of the movie 20  YEARS  OF  FIGHTING  HUMAN  TRAFFICKING  −  20  YEARS  OF FIGHTING FOR PEOPLE, dedicated to the role of the civil sector, primarily women’s organizations combating human trafficking and the importance of cross-sectoral cooperation and understanding of this criminal offence as a gender-based violence by all the actors included in the process of its alleviation. There were forums and discussions following all the screenings on the same topic, attended by representatives of the institutions and civil sector at the local level.

CAMPAIGN RESULTS: TRADITIONAL MEDIA (TV, radio, press) – ASTRA had 322 media releases with respect to the campaign and the related topics, during the implementation of the campaign. SOCIAL NETWORKS – ASTRA’s Facebook, Twitter and Instagram profiles were used for the promotion of the campaign. The total reach of the posts amounted to 101,898 and 156,700 of impressions. Moreover, 85,077 impressions were recorded on Twitter, while Instagram posts reached 7,678 persons.