On Saturday, June 5, at 1 pm at the Youth Square in Jagodina, the Independent Women’s Group – composed of representatives of women’s organizations, civic initiatives and socially engaged individuals – held a public gathering to support women and girls from Jagodina, potential victims of organized sexual exploitation in this city. Activists wanted to send them a message by direct action that they are not alone in this process and that they are guaranteed assistance and support by law without being conditioned by revealing their identities and participating in investigative and court proceedings.

The gathering was organized because of how this case is treated in public, characterized by the silence of the responsible institutions, reducing the whole issue to the point of a political affair, and the main suspect’s self-promotion on televisions with national coverage.

Activists of the group addressed the audience with several key messages. First, they talked about the reason for coming to Jagodina and the types of help and support available to victims and potential victims of human trafficking. In addition, it was said that Serbia last year adopted the National Strategy for the Realization of the Rights of Victims and Witnesses of Criminal Offenses for 2020-2025, and at the end of May, the Strategy for Prevention and Combating Gender-Based Violence Against Women and Domestic Violence for the Period 2021–2025. “Unless we now clearly and publicly demand unconditional protection and support for all victims and witnesses in the Jagodina case, these strategies will remain a dead letter on paper, and victims of violence will be permanently damaged.” – said one of the organizers of the gathering.

After the gathering, the activists distributed promotional materials with the contacts of the SOS support of the ASTRA to present citizens. 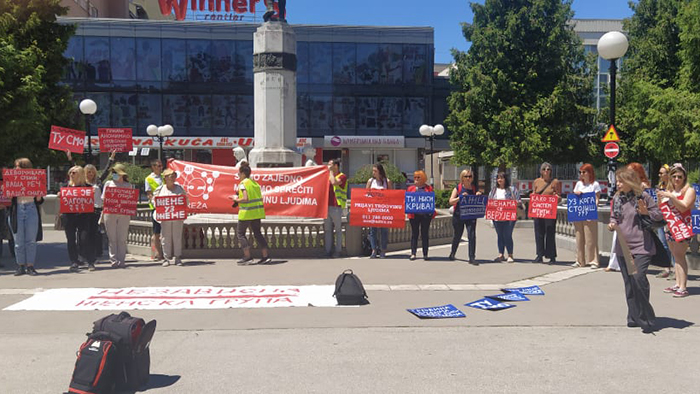 This public gathering is the first in a series of planned events of this independent group of activists. Group will be dedicated to exercising victims’ rights in this and similar violence cases, especially against women and children, calling on institutions responsibility and pointing the need for criminal convictions to perpetrators.