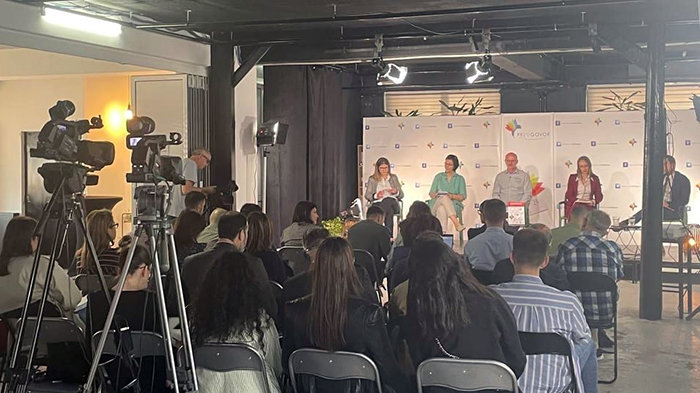 The prEUgovor coalition presented its latest Alarm – report on Serbia’s progress in the implementation of policies in the areas covered by Cluster 1 (Fundamentals), with the focus on political criteria and chapters 23 (Judiciary & Fundamental Rights) and 24 (Justice, Freedom & Security) of the EU accession negotiations. The event took place on Wednesday, 18 May 2022, from 11:00 at Prostor Miljenko Dereta and online.

Ahead of the new non-paper of the European Commission for Chapters 23 and 24, the prEUgovor coalition focuses on these topics, with the following conference panelists:

As stated at the presentation, this reporting period was marked by a referendum on changing the Constitution and general elections with accompanying campaigns and a series of regulations that were changed again at the last minute; lack of dialogue in institutions; mass civil protests in late 2021; the problem of enforcement as a key obstacle to the advancement of media freedom, the fight against corruption and organized crime. The way of presenting and implementing the activities from the action plans for Chapters 23 and 24 confirms the previously acquired impression that, instead of the will to implement substantial reforms, the Serbian Government is just “ticking items” in the process of Serbia’s accession to the European Union.

The authorities responded to the revelation of the brutal labor exploitation of Vietnamese workers in Zrenjanin with elements of human trafficking by denying responsibility and ignoring the case. Failed attempts to remove the mural of a convicted war criminal in downtown Belgrade in November led to attacks on human rights defenders, freedom of assembly was restricted, the state’s years-long lack of “dealing with the (war) past” was exposed, while the actions of extreme right-wing groups were tolerated. The police used various means to intimidate protesters, brought unlawful misdemeanor charges against them, and did not protect them from masked attackers armed with batons.

Presidential, parliamentary, and local elections in Belgrade and 12 other cities and municipalities were held on 3 April 2022. The final results have not yet been announced. This also shifts the deadlines for the formation of the future Government, which may delay the implementation of reform activities.

Russia’s attack on Ukraine at the end of February 2022 caused tectonic changes to the European security structure. The consequences of this crisis are also important for the EU enlargement policy, especially in the context of three new applications for membership (those of Ukraine, Moldova and Georgia), as well as for the position of Serbia, which, apart from limited progress in Cluster 1, also has chronic problems with foreign policy alignment with the EU. Within the framework of Chapter 24, which prEUgovor monitors, this crisis brings a new wave of refugees and a boost for right-wing extremism as new challenges for Serbia.

COMBATING TRAFFICKING IN HUMAN BEINGS: In the case of Vietnamese workers – international bodies are reacting, and Serbian institutions are silent

Keeping in mind the period covered by this ALARM report, the focus of ASTRA’s representative, Jasmina Krunić, was on the potential case of mass human trafficking for labor exploitation of workers from Vietnam engaged in the construction of the Linglong tire factory. The case was marked by intense reactions from the media, academia representatives and international institutions: the European Parliament reacted with a resolution on forced labor at the Linglong factory and environmental protests in Serbia (December 2021); UN experts in a joint statement (January 2022) expressing their deep concern over allegations of trafficking in Vietnamese migrant workers in Serbia and the UN Committee on Economic, Social and Cultural Rights in their Concluding Observations. However, the reactions of Serbian state bodies were absent or reduced to denial of responsibility and turning one’s head to harsh conditions of exploitation and coercion.

In connection with this case, ASTRA submitted 44 official requests and applications to 16 different state institutions. With their general content, these answers mostly inform that certain activities have been initiated, but even after six months, no concrete outcomes or results can be seen. Until now, ASTRA has received only 17 official responses (36%) from seven institutions (44%).

Several important Serbian anti-trafficking bodies have either never responded to inquiries and reports or have never carried out the activities for which they are mandated. For example, the National Anti-Trafficking Coordination Office did not provide a direct response. Also, the Center for the Protection of Victims of Trafficking did not conduct formal interviews to establish the circumstances and investigate the alleged exploitation of workers.

In the previous six months (November 2021 – April 2022), a member of the prEUgovor coalition ASTRA conducted several activities on this case: providing direct support to workers; conducting field visits; coordinating work with activists in the field, as well as conducting intensive correspondence with state institutions, in which they are called to account; putting pressure on the National Referral Mechanism for Victims of Trafficking; complying with the SOP; participating in more than thirty meetings and events (online and live), as well as writing contributions for national and international actors.

All these insights will be collected in a comprehensive report on this case, which, as Jasmina Krunić announced on this occasion, will soon be presented to the public. The report will include all the details of the arrival and stay of Vietnamese workers in Serbia so far, as well as controversial correspondence with institutions, reactions from international bodies, and domestic and foreign media.

Regarding the crisis caused by the war in Ukraine and mass migrations from that country, the representative of ASTRA pointed out that these events put a large number of people, primarily women and children, at risk of human trafficking. In addition, the war in Ukraine is leading to a deepening economic crisis, and the number of potential victims is growing in conditions of poverty. She pointed out that there are not many citizens of Ukraine in Serbia (4-6 thousand for now) and that they are mostly in transit. However, the longer the conflict lasts and the migration, migrants from Ukraine will be at greater risk of smugglers and traffickers due to poverty and uncertainty. On this occasion, Jasmina Krunić reminded us that Serbia, regardless of the war in Ukraine, has been hit by economic and war migrations for several years and that they have already led to numerous exploitation cases, including human trafficking. Those events created several new modes of human trafficking, which will be a challenge for both domestic and international anti-trafficking bodies.

Unfortunately, according to the new Alarm, Serbia, for now, is successfully ignoring this new version of slavery.

A video of the latest Alarm report presentation can be found HERE.

Publication PDF can be found HERE.

The conference is organised as part of two projects implemented by the prEUgovor coalition: “PrEUgovor for Rule of Law and EU integration of Serbia” supported by Balkan Trust for Democracy, a project of the German Marshall Fund of the United States and the Royal Norwegian Embassy in Belgrade, and “PrEUgovor Policy Watch: building alliances for stronger impact in uncertain future,” funded by the European Union.