ASTRA – Action against human trafficking launches a campaign 20 YEARS OF FIGHTING HUMAN TRAFFICKING − 20 YEARS OF FIGHTING FOR PEOPLE. The campaign intended to emphasize the role and achievements of the civil sector in the prevention and suppression of trafficking in human beings. The realization of the campaign is a part of the project “A space for place to fight human trafficking”, supported by the European Union, and project “Solidar and united against COVID19 and trafficking in human beings” commissioned by the Federal Ministry for Economic Cooperation and Development (BMZ) and implemented by the Deutsche Gesellschaft für Internationale Zusammenarbeit (GIZ).

The twentieth anniversary of the civil sector activism in the fight against THB coincides with the anniversary of Serbian adopting one of the most important international documents related to the suppression of human trafficking – the Palermo Protocol. In addition, the year behind us, turbulent and full of challenges, has once again confirmed the importance and flexibility of the civil sector in extraordinary circumstances, especially in providing services to vulnerable groups. Last year, ASTRA’s SOS line recorded an increase in the number of calls by 60% (a total of 6,060 calls were received) and the number of field actions and actions of direct assistance to victims of 136%. 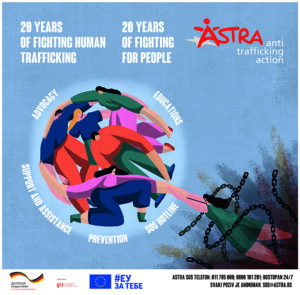 From its establishment until today, all ASTRA’s activities are dedicated to the fight against all forms of exploitation and trafficking in human beings, especially women and children. The heart of ASTRA and the source of all information and initiatives is the SOS line for victims of human trafficking – the only licensed line of its kind in Serbia. The SOS line provides us with daily insight into cases of human trafficking, the needs of victims, the levels of vulnerability of certain groups/persons, and recruitment methods. We learned: how and with which institutions to work on sensitizing and understanding the victim’s trauma and problems of human trafficking, what legal and systemic solutions should be advocated, and to whom preventive activities and awareness-raising campaigns should be directed. Our goal was and remained the same: to create an adequate social response to human trafficking.

This specifically means that in these 20 years:

Given our experience in the fight against human trafficking and the complexity of this topic, we must cooperate with institutions and have a good partnership. Unfortunately, however, this correlation is also characterized by certain illogicalities:

In the coming months, the campaign 20 YEARS OF FIGHTING HUMAN TRAFFICKING − 20 YEARS OF FIGHTING FOR PEOPLE will try to remind representatives of institutions, civil society and the general public of the importance and contribution of non-governmental organizations in combating human trafficking. We will also reiterate the importance and necessity of cross-sectoral cooperation as the only real and effective approach in tackling this problem and ensuring adequate treatment of victims inside and outside the system.

We invite you to support us in this endeavour!

By supporting us and this campaign, you will contribute to making more visible to the general public, including people at risk and victims of human trafficking, about our work and the types of help and support we provide.