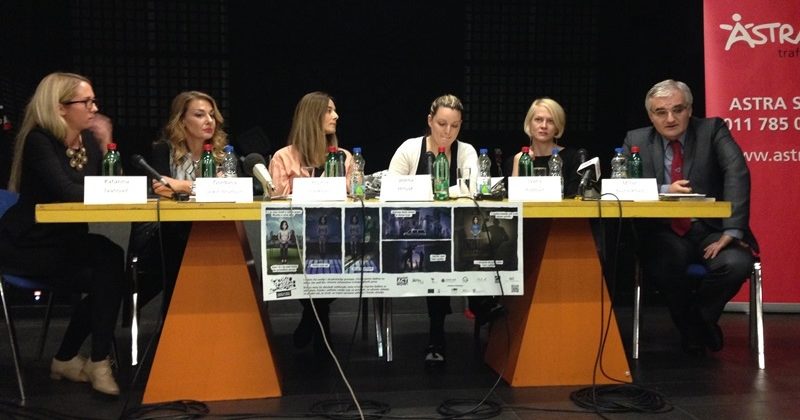 Every year ASTRA marks European Anti-trafficking Day, on October 18. This year several activities have been conducted in order to highlight the problem of human trafficking, putting this phenomenon in focus of media reporting, responding to refugee crisis and summarizing the current situation and institutional coverage of anti-trafficking field.

On Friday, October 16 ASTRA organized a working breakfast with journalists to exchange information and experiences about media coverage of human trafficking, the most frequent mistakes, stereotypes, forms of reporting. At the meeting we heard many examples about good and bad practice in media; the participants also gave us an excellent advice how to build better relations with the media and steer cooperation in the right direction. Journalists’ awareness of different types of trafficking and changing trends prove that media strategy should be made in order to raise number of objective articles, stories, reasearches, and at the same time to raise citizens’ awareness about human trafficking as a social problem and inform more people about ways to avoid risks.

On the occasion of the World Day against Poverty, on Saturday, October 17 ASTRA, together with Women in Black and the Autonomous Women’s Center, organized a street action and the distribution of humanitarian aid in Belgrade. We wanted to stress that a large number of people in search of better living conditions, running from poverty, war, unemployment may be exposed to various forms of exploitation. It is not unusual to meet people who do not have other solution but to accept job proposals they have not checked and who cannot afford to be too cautious. It is very important to make clear that every person could be in the potential situation of  human trafficking, not only ”naive and uneducated“ ones.

One day later, on October 19, ASTRA organized a panel discussion “What did we want, where are we now and where are we going in combating human trafficking in Serbia?“ in Belgrade. Speakers were Gordana Jekić- Bradajić, Deputy Appellate Public Prosecutor in Belgrade, Biljana Slavković, psychodrama therapist, Ivana Radović from ASTRA, Jelena Hrnjak from NGO Atina and Mitar Đurašković, Serbian Anti-trafficking Coordinator. The discussion started with a brief overview of the beginnings of the anti-trafficking in Serbia and the evaluation of the achievements. It could be heard that the Republic of Serbia has made a huge step forward in order to supress and prevent human trafficking, and to a certain extent to protect victims, too, but there is no doubt that there are still many aspects of the problem to be covered. National legal framework is developed within international documents, but adopted instruments are insufficiently used in practice. The Anti Trafficking Coordinator announced that the National Action Plan for supressing of human trafficking would be adopted by the end of this year, since the previous one expired four years ago. Further, this is the year of anniversaries, it has been 15 years since the Palermo Protocol was adopted, and it can be said that it is for how long the anti-trafficking activities  have been present  in Serbia.