FROM EXPERT DISCUSSION TO POSSIBLE PROPOSALS FOR LEGAL AMENDMENTS

Report from the EXPERT MEETING

At the expert meeting “National Mechanism for Referral of Domestic and Foreign Victims of Trafficking in Human Beings in Serbia – CHALLENGES AND OPPORTUNITIES FOR IMPROVEMENT,” on Tuesday, May 10, ASTRA presented its two new analytical editions: (1) Challenges of recognition of the status of human trafficking victim in the Republic of Serbia and (2) Challenges in regulating the temporary residence of foreign victims of trafficking. Through several contact points, both editions analyze the functioning of the National Referral Mechanism and its main actors to identify challenges in their work, make recommendations for improvement, and initiate talks among actors and experts in the field of combating trafficking in human beings. The goal was to find solutions for the improvement of NRM. As every time so far, this whole endeavor (research, analysis, and gathering) was launched with one premise, which ASTRA has been guided by from the very beginning − improving the position of victims of human trafficking and respecting their rights. The gathering was attended by the representatives of the centers for social work, the Center for the Protection of Victims of Trafficking, the Ministry of Labor, Employment, Veterans and Social Affairs, the Ministry of Interior, educational institutions, civil society organizations, media, and others.

In an introductory speech, ASTRA CEO Marija Andjelković presented the goals of these two analyzes. After that, Jasmina Krunić, Head of Policy and Learning of NGO ASTRA, took the floor to present the results and recommendations of the analysis Challenges of recognition of the status of a human trafficking victim in the Republic of Serbia. This short publication is an exact analysis of the legal status of the Center for the Protection of Victims of Trafficking, its functioning, decision-making procedures, and possibilities for deciding on user complaints. 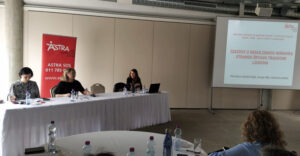 The analysis points out these challenges: 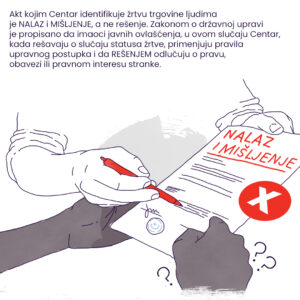 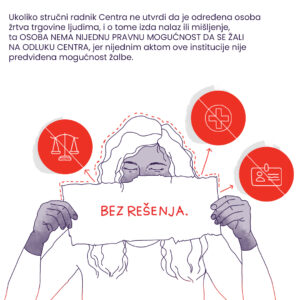 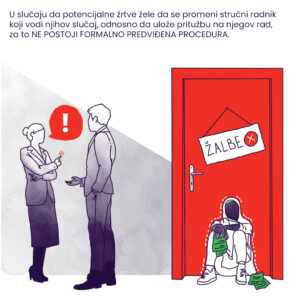 The conclusion is that all three of these challenges violate the exercise of the rights of victims of trafficking. What is additionally worrying is that the Draft of the new Law on Social Protection does not offer solutions to the identified problems in the functioning of the Center and brings some other controversial proposals. At this moment, a timely reaction is crucial – hence this set of RECOMMENDATIONS for changes to this draft would solve the mapped problems and improve the rights of victims of human trafficking.

*** Publication Challenges of recognition of the status of human trafficking victim in the Republic of Serbia is published as part of the project PrEUgovor for Rule of Law and EU integration of Serbia supported by Balkan Trust for Democracy, a project of the German Marshall Fund of the United States and the Royal Norwegian Embassy in Belgrade. 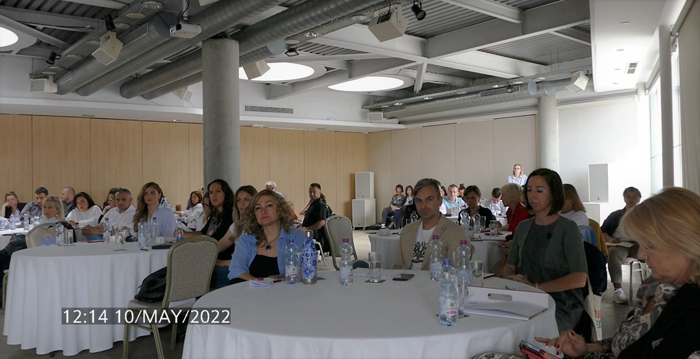 In her concluding remarks, the author states that this analysis contributes to initiating a broader debate on improving legislation and practice, and recommends further reviewing the current legislative framework, standardizing practice, and improving the capacity of all actors involved in regulating the residence of foreign victims and potential victims of trafficking.

*** Publication Challenges in regulating the temporary residence of foreign victims of trafficking is a part of a project “REST: Residence Permit project as a way of improving the protection of victims of human trafficking” coordinated by LEFÖ-IBF and implemented in cooperation with partner organizations located in other five European countries: Comité Contre l’esclavage Moderne (CCEM) in France, Proyecto Esperanza in Spain, CoMensha in the Netherlands, La Strada Moldova in Moldova and Astra in Serbia. 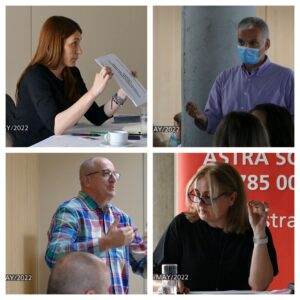 After the presentation of the analysis, a DISCUSSION followed. It was further clarification of how and in what way these law inaccuracies further endanger the realization of the rights of victims of human trafficking. On this occasion, we single out some of the most impressive statements.

Jasmina Krunić explained that, apart from the fact that the decision on the status of the victim in the form of findings and opinions deprives the victims of the possibility to file a complaint, that kind of document is easy to challenge in court, and the defense lawyers of potential traffickers often use it. This was confirmed by Dejana Spasojević Ivančić, a long-term associate of ASTRA and a legal representative of many of our clients. On this occasion, Dejana added that the finding and opinion have their purpose only when granting the status of a particularly sensitive witness. She also pointed out that the finding was not submitted to the victims for inspection. Instead, they only receive a notification. This is especially important in cases where the potential victim has not been found to have been officially identified.

According to Marija Andjelković, ASTRA CEO, confirmation of the status of victims by a decision would protect victims from arbitrary interpretations. Whether someone is a victim or not is a status issue and should not be decided by findings and opinions because the victim gains or loses certain rights based on that status.

On this occasion, Miroslav Jovanović reminded us that the procedure of identifying victims of human trafficking in Serbia is an example of good practice because the status of victims is granted in the social protection system regardless of the outcome of court proceedings for the crime of human trafficking.

Nada Padejski, a psychologist and head of a safe house in Novi Sad, reminded us that some victims of human trafficking were taken care of in safe houses because the shelter of the Center did not work and that it was a great challenge, given the lack of capacity and expertise. In addition, she pointed out the need for additional education for employees in the centers for social work. She believes that establishing the Center for the Protection of Victims of Trafficking in Human Beings has confused employees of centers for social work what their responsibilities are. On this occasion, Nada Padejski asked the question of what is happening with potential victims whose status has not been confirmed by the findings, i.e., have not been officially identified: at what time and how their previously granted rights are revoked, if their rights were previously granted by initiating the identification procedure, as pointed out by the coordinator of the Protection Coordination Service of the Center for Protection of Victims of Trafficking, Miroslav Jovanovic. 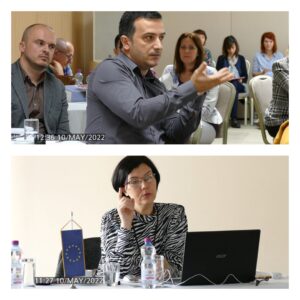 Professor Milan Žarković from the Criminal Police University underlined that the status issue is being discussed here and that it is obvious that some legal solutions are disputable. He believes that the Law will be changed at some point and that it is only a matter of time and initiative. On this occasion, he reminded us of the earlier initiations of changes in laws and regulations when it was realized that they were harmful.

Sladjana Cabric, a representative of the Ministry of Labor, Employment, Veterans, and Social Affairs (Sector for Social Protection), proposed the formation of a working group, which would include representatives of CSOs, and launched a proposal / initiative to address this problem. The moment is right, especially bearing in mind that amendments to the Law on Social Protection are underway.

In the second part of the discussion, there were talks about legal ambiguities in regulating the stay of foreign victims of human trafficking. Representatives of MIA were most interested in this subject. As the author of this analysis, Miroslava Jelačić Kojić, pointed out, the biggest problem in this area is the lack of an effective legal remedy in case of reviewing the decisions of the Center for the Protection of Victims of Trafficking in Human Beings. If a person of foreign origin, a potential victim of trafficking, is not officially identified as a victim, and if there is no other reason for his or her residence, a decision to return to his or her home country can easily follow. This can be threatening for potential victims in terms of their safety and the safety of their families. In addition, a person of foreign origin who has not been confirmed as a victim and does not have a regulated legal status and basis for residence in the Republic of Serbia is denied access to rights and assistance that must be guaranteed by law and international conventions. Even in the situation of not being removed from the territory, that person remains completely unprotected, except in the segment of meeting basic humanitarian needs, which is provided by the Commissariat for Refugees and Migration.

A good part of the discussion was dedicated to the importance of the findings and opinions in the court proceedings and that they are easily refuted by the defendants’ lawyers. However, we would like to emphasize once again that confirmation of the status of a victim in the form of a decision has multiple meanings, especially since it opens the possibility for the person whose status was disputed to appeal against such a decision.

In any case, the dynamic discussion after presenting the challenges in the functioning of the National Victim Referral Mechanism and the expressed interest of anti-trafficking actors open space for optimism that we will reach common solutions in the near future.