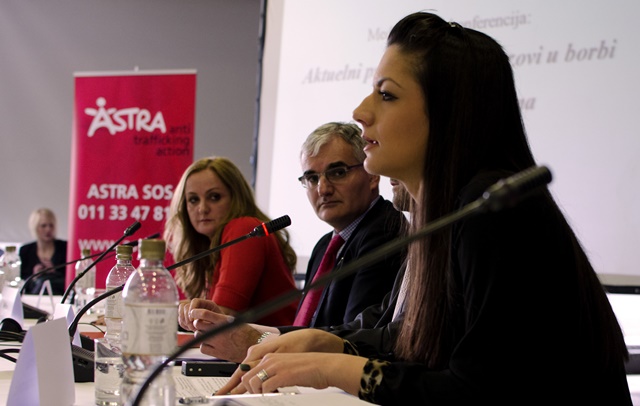 On March 15, 2013, ASTRA organized the international conference “Contemporary Psycho-Social Challenges in Combating Human Trafficking” in Belgrade. The goal was to highlight contemporary challenges in combating human trafficking that are rarely discussed among experts and stakeholders despite their importance in terms of EU integration process. At the occasion over a hundred national and international experts discussed about two major issues in the field. They made recommendations and conclusions that should contribute to more effective suppression of human trafficking and easier recovery of its victims.

The conference was opened by Lucca Bianconi, Head of the Political Section at the EU Delegation to Serbia, national coordinator for combating trafficking in human beings, Mitar Đurašković, and co-coordinator of ASTRA, Tamara Vukasović. After that, participants of the conference adressed the issue of irregular migration and its connection to human trafficking and the topic of adequate approach to psychotheraputic work with victims on two separate pannels.

Actualized by the visa liberalization, high unemployment rate and the poverty, irregular migration is becoming a pressing issue in Serbia. Irregular migrants are identified as persons under a greater risk of falling victim to human trafficking, both because of their irregular status and work and great dependance on people organizing their tranzit to the destination country. All of the curently migrating persons, that is one billion people according to international assesments, can befall into that position. Representatives of organizations operating in countries that constitute migratory route Turkey – Greece – Macedonia – Serbia – Croatia presented their experiance with the interconnection between irregular migration and human trafficking on ASTRA’s conference. Speakers on the panel on migration and THB in terms of EU integration were Zaid Husain Hydari from Helsinki Citizens’ Assembly and Tuba Dundar from Human Resource Development Foundation from Turkey, Eleni Pasia ahead of the Greek Council for Refugees, Maja Varoshlija from Open Gate – La Strada Macedonia and Žarko Hadži Zafirov from Macedonian Young Lawyers Association, Munir Podumljak from Croatian NGO Partnership for local development, Catalina Neacsu ahead of Adpare from Romania, Pablo Rojas Coppari from Irish Migrant Rights Centre and national experts Ivana Radovic from ASTRA and Vladimir Petronijević ahead of Group 484.