INTERNATIONAL CONFERENCE ON LABOR EXPLOITATION AS A FORM OF HUMAN TRAFFICKING 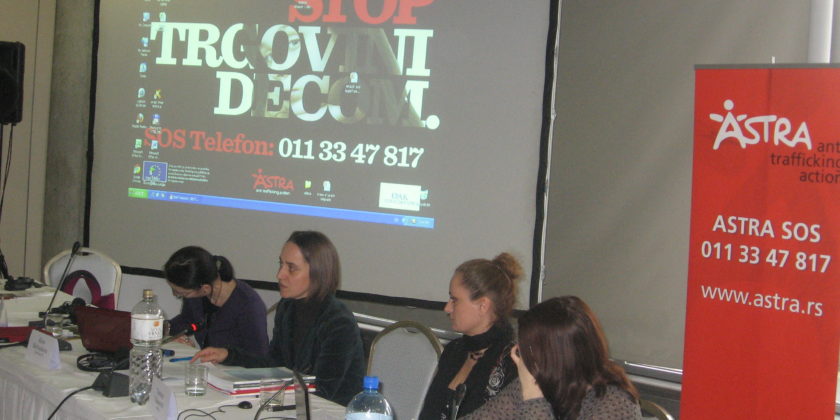 NGO ASTRA – Anti Trafficking Action organized the first international Conference on Labor Exploitation as a Form of Human Trafficking, in Belgrade on March 1 and 2, 2012. The Conference was the first event dedicated to this problem in Serbia.  Topics discussed at the conference include workers’ rights, labor exploitation as a form of trafficking in human beings and the improvement of relevant policies in the area of prevention and prosecution, with a special regard to the appropriate identification and treatment of victims of labor exploitation.

The reason for organizing such a conference lays in the fact that labor exploitation as a form of human trafficking has been on the rise in the last couple of years, shown both by ASTRA SOS Hotline data, and the data gathered by other relevant anti-trafficking actors in Serbia. However, this rise has not been accompanied by the appropriate state response. Namely, there are still numerous perplexities and general lack of knowledge of what labor exploitation is and how it should be treated and prosecuted, while assistance and protection programs are not adjusted to the needs of a new category of victims. An upward trend in the number of identified labor exploitation cases has been registered in the rest of Europe, too.

ASTRA’s Conference on Labor Exploitation as a Form of Human Trafficking is the first conference focused on the problem of human trafficking for the purpose of labor exploitation in Serbia. It gathered participants from Serbia, Europe and Eurasia – representatives from international organizations, relevant Serbian trade unions, the Ministry of Economy and Regional Development, the Ministry of Labor and Social Policy, the Labor Inspectorate and the National Employment Service, NGO activists from the country and abroad, lawyers, representatives of the police and prosecutor’s office. Participants were discussing and exchanging experiences about different problems pertaining to labor exploitation and trafficking in human beings and working on formulating recommendations that would contribute to the enhancement of policies in this area.

In October 2011, ASTRA conducted an opinion poll (representative sample comprising 2506 adult citizens of Serbia) and focus group/qualitative survey (five focus groups in which five different groups of stakeholders were questioned separately – the unemployed, students, the employed, trade unions and public servants and persons employed with the National Employment Service, employment agencies and youth cooperatives) examining citizens’ perception of labor exploitation. The surveys were conducted within EU supported project “Make it Work” and their results were presented at the beginning of the conference. According to the surveys, the citizens of Serbia understand labor exploitation as poor working conditions and violation of labor legislation in a transitional economy; when they observe labor exploitation in the context of human trafficking, the respondents mostly see it as something far away from their lives and their reality, although a large percentage of them report that they themselves have received suspicious job offers or that their friends or relatives have experienced labor exploitation. Finally, men are in no way perceived as potential/possible victims of trafficking.

In the first session, Natalia Hofman from the ILO Moscow office talked about practical aspects of fight against human trafficking for the purpose of labor exploitation, while Jereon Beirnaert from the International Trade Union Confederation discussed the role of trade unions in combating trafficking in human beings. The session was concluded by Olivera Otašević who presented ASTRA’s experience and practice in providing assistance to victims of labor exploitation. In the session focusing on judicial practice in combating forced labor as a form of human trafficking, Joanna Dabrowska-Samsel and Ernest Samsel, lawyers from Poland talked about their practice of representing victims of labor exploitation, whilst Alovsat Aliev from the Azerbaijan Migration Center and Zoran Stojkov, lawyer from Belgrade, talked about the SerbAz case from the perspective of NGOs in Serbia and Azerbaijan that were involved in the case. Finally, Hoang Do Duy, activist from the Czech Republic presented the tree workers case in this country.  In the third session, Klara Skrivankova from Anti Slavery International talked about forced labor across borders and its links to major sporting events, Victoria Kyzym from La Strada Ukraine discussed the problem of labor exploitation from the point of view of a direct victim assistance provider, while Astrid Ganterer from OSCE/ODIHR talked about challenges in relation to human trafficking throughout the OSCE region. The moderators were Madis Vainomaa, independent expert, Munir Podumljak from the partnership for Social Development, Croatia and Tamara Vukasović from ASTRA.

Some of the most important recommendations and conclusions made at the Conference are as follows: