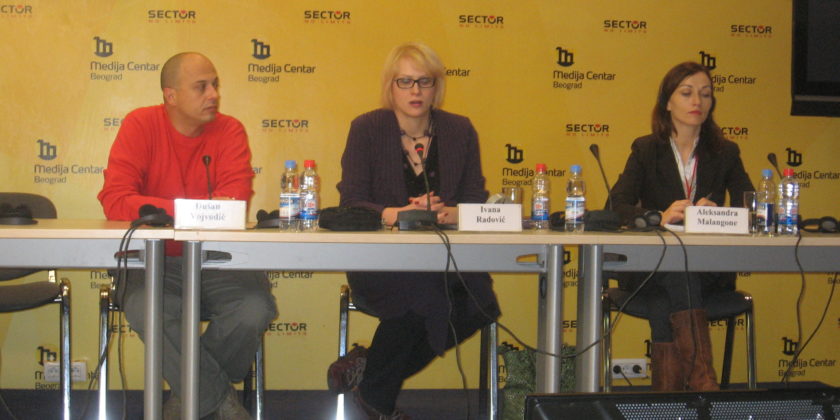 On the occasion of the International day for the Abolition of Slavery and ASTRA’s 10th anniversary, a press conference was organized in Belgrade on 2 December 2011.  Aleksandra Malangone, member of GRETA (monitoring mechanism for Council of Europe’s Convention on Action against Trafficking in Human Beings), Dušan Vojvodić, journalist and author of documentary movies on human trafficking and Ivana Radović, Coordinator of ASTRA Prevention and Education Program discussed human trafficking in Serbia today, significance of independent monitoring and reporting on the respect of victims’ rights and compliance with other obligations undertaken by ratifying international instruments, as well as the results of ASTRA’s ten years of work and plans for future.

It was stressed at the press conference that for the ten years of work, ASTRA received 14,594 calls through ASTRA SOS Hotline and identified and/or assisted 387 trafficking victims (37% of children). Over three forth of victims identified in this period were the citizens of Serbia, while nearly for half of them Serbia was also destination country. The most often cross-border destination was Italy, followed by countries on a transit route to Italy – Croatia, Bosnia and Herzegovina and Montenegro, as well as Austria and Germany. Trafficking victims assisted by ASTRA were exposed to sexual exploitation (72%), labor exploitation (14%), forced begging (7%), forced marriage (6%), illegal adoption (1%) and coercion into criminal activity (0,3%). In this period, ASTRA provided to its clients psychological assistance 932 times, legal assistance 496 times, medical assistance 243 times, 804 actions in the field were carried out, alongside with various forms of assistance and support in the process of recovery and reintegration in accordance with the needs of every particular victim that were always available (return to school, alternative accommodation, rebuilding social and family networks, issued associated with the status etc.).

The Republic of Serbia ratified, on 14 April 2009, Council of Europe’s Convention on Action against Trafficking in Human Beings, which observes human trafficking above all as the violation of human rights and as an offence to the dignity and the integrity of the human being. The ratification means not only that Serbia has undertaken certain obligations, in particular in terms of the provision and enhancement of protection standards for trafficking victims and their rights – privacy, assistance to victims, recovery and reflection period, compensation, legal protection and the like, but also that it agrees to the monitoring and reporting on the compliance with this Convention on its territory by the Group of Experts on Action against Trafficking in Human Beings – GRETA. The evaluation process in the third group of countries, including Serbia, will start in February 2012, while final report and recommendation are announced for the second part of 2013.

Independent and impartial monitoring of the fulfilment of obligations envisaged by international documents, including CoE Convention, represents an important prerequisite for the improvement of the quality of services provided to trafficking victims and protection of their rights. The first alternative report in that respect is ASTRA’s Human Trafficking in Serbia – Report on for the period 2000-2010 published in July 2011, which analyzes theoretical and practical implementation of the two most important international anti-trafficking documents. Victim assistance in Serbia depends primarily on support of foreign donors, while support from the Republic of Serbia is sporadic and non-systemic, for which reason assistance and programs are not designed in such a way so as to respond to changing trafficking trends and actual needs of persons receiving assistance; initiatives and innovations are accepted very hardly, and when they are accepted, it is not for the sake of better position of victims, but in order to fulfil some other political goals and ambitions.

Celebration of the 10th anniversary of ASTRA’s work continued that evening at a party held in Belgrade, in the company of ASTRA’s friends and associates. Some of them received special awards for support they were giving us in the previous 10 years.