INTERNATIONAL DAY FOR THE ABOLITION OF SLAVERY – 2 DECEMBER 2014 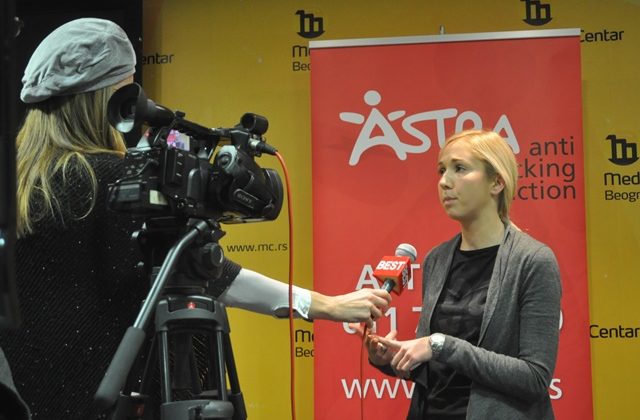 International Day for the Abolition of Slavery is celebrated worldwide in memory of the adoption of the UN Convention for Suppression of the Traffic in Persons and of the Exploitation of Prostitution of Others  in 1949.  To mark this day, ASTRA organized the presentation of the BAN Human Trafficking mobile phone application in Media Centre Belgrade. Keeping track of technological development and growing number of users of mobile telephones, ASTRA has created an application aimed at interactive and dynamic information on the problem of human trafficking.  The application targets all, but in particular young people, for which reason the main audience at this event were pupils from the Second High School of Economics in Belgrade. Playing with different characters, they had an opportunity to go through different situations that may take them into some form of exploitation: labor exploitation, sexual exploitation, coercion into criminal activities, domestic servitude, forced begging. They also participated in the quiz which contained general and basic questions about human trafficking, different recruitment methods and different ways out of human trafficking. In this way, getting informed about potential dangers, young people learn how to recognize similar situations in their daily lives and how to avoid them.

A night before December 2nd, ASTRA’s activists hosted Deli Monday, an event which traditionally takes place on Mondays in KC Grad, Belgrade. On the menu that night were Mexican tacos prepared our way of home products and salads bought directly from suppliers and desert prepared of fair-trade chocolate.

Besides enjoying  good company and delicious food, the guests had an opportunity to learn more about ASTRA’s work and the phenomenon of human trafficking, to take promotional materials, get informed about ASTRA’s latest campaign and watch the videos on the big screen. Money collected by selling the meals was placed in ASTRA’s fund for assistance to victims of trafficking. Organizing this action we wanted to remind people that human trafficking represents a dangerous social problem which works against human rights. This action sought to encourage people to put meaning to the words of the Universal Declaration of Human Rights that “no one shall be held in slavery or servitude” through their actions.