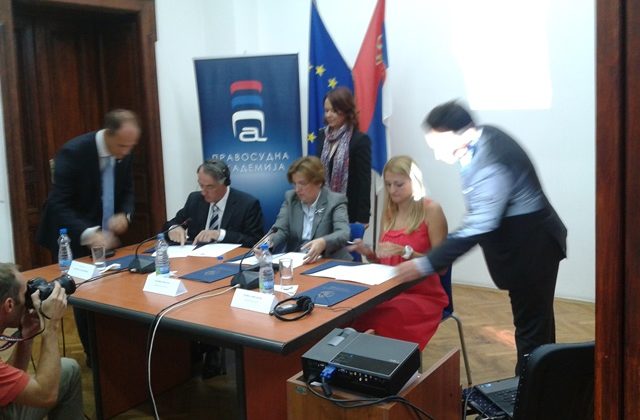 Memorandum of Understanding between the Republic Prosecutor’s Office of the Republic of Serbia and NGO ASTRA – Anti Trafficking Action was signed on September 13, 2012 in the premises of the Judicial Academy in Belgrade. The Embassy of France to Serbia is ASTRA’s partner in the establishment of this cooperation.
The Memorandum of Understanding was signed by Republic Prosecutor, Zagorka Dolovac and President of ASTRA, Marija Andjelkovic as parties and French Ambassador, H.E. François-Xavier Deniau as a partner to the Memorandum. The ceremony was attended by Vincent Degert, Head of the Delegation of EU to Serbia, guests from diplomatic corps, state institutions representatives, members of relevant civil society and international organizations. “I am very happy that the Republic Prosecutor’s Office and NGO ASTRA decided to make their cooperation official and thus improve the efficiency of work and the quality of protection of trafficked persons in judicial proceedings”, said Ambassador Deniau on the occasion.
Republic Prosecutor, Dolovac thanked the French Embassy for support and promised that Serbian Prosecutor’s Office would continue to be the partner of all institutions and organizations which fight human trafficking. President of NGO ASTRA, Marija Andjelkovic stressed that this is the first such agreement concluded between an NGO and an institution of the criminal justice system in Serbia. “Closing this agreement is an important step forward for the Republic of Serbia – not only as a sign of readiness to cooperate with civil society, but also an advance in establishing intersectoral collaboration of all actors taking part in fight against trafficking and victims assistance”, Ms Andjelkovic further accentuated. The two parties expressed hope that other actors involved in anti-trafficking will follow their example, for it is only through joint efforts that improvement of victims’ protection and treatment in the court can be secured. In addition, multilateral cooperation could contribute to more effective identification, consistent prosecution and appropriate castigation of perpetrators.
Head of the Delegation of European Union to Serbia Vincent Degert also stressed the importance of the memorandum. Aware of the problem of human trafficking in our country, he said: “It is very important that Serbia as a candidate for membership in EU is committed to fight against human trafficking, but also to show such commitment in practice – through the number of judgments and severity of penalties against the offenders”.
The Republic Prosecutor’s Office and NGO ASTRA committed to mutual cooperation in the field of improvement and protection of victims’ rights, exchange of information on cases involving human trafficking and preventive activities. The main objectives of this cooperation are increasing the quality of services for victims, protection of their rights, together with upgrading operational procedures and mechanisms within the system that are concerned with suppression of human trafficking.
The cooperation will help the generation of data on indictments for trafficking offences and on consequent judgments, thus enabling public insight into the adequacy of prosecution and giving a clearer picture of the dimensions of this problem in our country.
The MoU signatories are convinced that mutual cooperation could help resolving numerous issues that burdened the work of judicial and prosecutorial authorities so far with regard to human trafficking cases. In addition to advancing the position and protection of trafficking victims before court, it is important to work on better efficiency of court proceedings, persistent prosecution and appropriate punishing of offenders, as well as on raising public prosecutors’ awareness of the specific characteristics of human trafficking. For this reason, one of the activities that ASTRA is going to carry out in accordance with the signed MoU is training on the problem of human trafficking for the prosecutors from the whole Serbia scheduled for November this year.