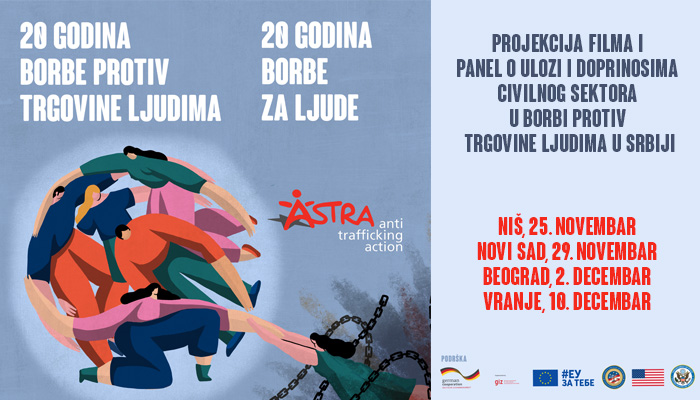 The most common form of human trafficking in Serbia is sexual exploitation. In 90% of cases, victims of human trafficking for sexual exploitation are women and girls. Between 70 and 80% of these women have experienced violence in the past – domestic, partner, or peer violence. The experience of violence makes them more vulnerable – because fleeing from one type of abuse, they end up trapped in another.

That is why ASTRA, as part of the campaign “16 days of activism against violence against women”, in the period from November 25 to December 10, organizes five events throughout Serbia. We want to draw attention to the high rate of violence against women and girls in Serbia. And, from the perspective of our work in combating trafficking in human beings, we want to point out how this violence is reflected and multiplied with even more severe consequences if we do not react to it in time.

During the campaign “16 days of activism against violence against women,” we will organize four screenings of a film produced by ASTRA entitled 20 YEARS OF FIGHTING HUMAN TRAFFICKING –  YEARS OF FIGHTING FOR PEOPLE, dedicated to the role of civil society, primarily women’s organizations in combating human trafficking cross-sectoral cooperation and understanding of this crime as gender-based violence by all actors involved in the process of its mitigation. All screenings are followed by discussions on the same topic, whose participants represent institutions and the civil sector.

In addition, on December 6 in NOVI PAZAR, in the hall of the Cultural Center Novi Pazar starting at 1 pm, together with organisation Implus from Tutin, we organize one more event – film screening and panel discussion entitled “Modern forms of trafficking in women and children in the context of religious terrorism and radicalism.” On this occasion movie, Nobody Needs HER will be presented. It is a movie about women from this area, recruited by Islamic fundamentalists, who are currently in camps in Syria and are potential victims of human trafficking.

All the listed events are being realized with the support of the American Embassy.

Documentary YEARS OF FIGHTING HUMAN TRAFFICKING − 20 YEARS OF FIGHTING FOR PEOPLE is a part of the campaign of the same name. The realization of the campaign is a part of the project “A space for a place to fight human trafficking,” supported by the European Union, and project “Solidar and united against COVID19 and trafficking in human beings” commissioned by the Federal Ministry for Economic Cooperation and Development (BMZ) and implemented by the Deutsche Gesellschaft für Internationale Zusammenarbeit (GIZ).

The film Nobody Needs HER was created as part of the project “Strengthening the Community’s Resilience to Modern Forms of Human Trafficking in the Context of Religious Terrorism and Radicalism.” Impuls Tutin implemented the project as part of strengthening the capacity of local civil society organizations to prevent and combat human trafficking. ASTRA. These activities are also part of ASTRA’s broader project, “A space for a place to fight human trafficking,” supported by the European Union.