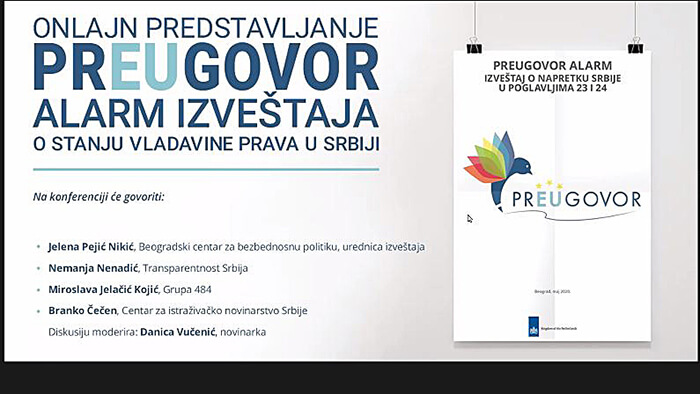 At today’s (June 10, 2020) online presentation of the latest edition of the ALARM report of the prEUgovor coalition, which accompanies the reforms in Chapters 23 and 24, as well as in specific political criteria of the EU accession process, it was pointed out that negative tendencies continued in most areas. The report covers the period from October 2019 to April 2020. Further deterioration occurred during the COVID-19 virus pandemic in the last two months, and especially after the state of emergency was declared on March 15.

The report unequivocally indicates that the state of emergency, introduced due to the COVID-19 pandemic, has exposed the absence of reforms in Chapters 23 and 24 and the non-functioning of institutions. And otherwise, endangered rights and freedoms, such as the right of citizens to liberty and security, electoral rights, freedom of the media, or the rights of migrants, suffered a severe blow during this period. Even Serbia’s commitment to European integration has been called into question. This alarming situation indicates the need for a reaction from the domestic public and relevant international institutions.

Speakers at the ALARM online conference were:

The discussion was moderated by Danica Vučenić, a journalist.

All speakers focused on stagnation or setbacks in the implementation of reforms in the areas they report on and controversial moments in this reporting period that showed the primary trend of capturing the state and endangering the rule of law.

During this period, we had a series of affairs, including “Krushik” − a textbook example of capturing the state and “sucking public resources into private pockets,” stated Jelena Pejić Nikić, BCPB, editor of the report. Increased lack of tolerance of the government to any criticism and reporting that does not support it was also shown in this reporting period. As well as the simulation of reforms for a positive assessment on paper was present.

Nemanja Nenadić from Transparency Serbia especially pointed out the problem of the so-called “Functionary campaigns” in the pre-election period, i.e., spending public funds for political and promotional purposes. There was also talk of non-transparent public procurement of medical care and funds during COVID.

Speaker in front of Group 484, Miroslava Jelačić Kojić, pointed out as a key problem the growing presence of anti-immigrant rhetoric and the transfer of anti-migrant rhetoric from social networks to the official media and everyday speech. Such statements are especially present in the speeches of right-wing politicians and leaders of right-wing movements, who thus collect cheap political points in the pre-election race.

Branko Čečen from CINS pointed out the suffocation of media freedoms and the fall of Serbia on the list of media freedom of Reporters Without Borders in 2020. Since 2016, this decline has been constant, Serbia has fallen by a total of 34 places and is now in 93rd place. Media freedoms were especially stifled during the state of emergency; this is best illustrated by the case of the arrest of journalist Ana Lalic for reporting on the situation at the Clinical Center of Vojvodina.

Through the voting by those present at the conference, the non-action of the institutions (National Assembly, the Constitutional Court of Srbija, REM, the Republic Public Prosecutor’s Office, the police) during the state of emergency was pointed out as particularly worrying.

Several negative trends can be identified concerning the suppression of trafficking in human beings (THB) in Serbia. First, the number of identified victims of THB was reduced by half in 2019, in comparison to 2018, which happens to be a record low. Second, the ASTRA SOS helpline received 71% more calls in the first quarter of 2020. Third, the number of court verdicts in THB cases has decreased over the last five years. The adopted Standard Operating Procedures are not binding and remain largely unknown to key institutions. The Centre for the Protection of Victims of Trafficking is understaffed, while the role of civil society organizations in this area remains underestimated.

ALARM was also presented to EU officials on the second closed online conference. At this presentation on Marija Andjelkovic, ASTRA’s CEO, she spoke about the situation in this area. 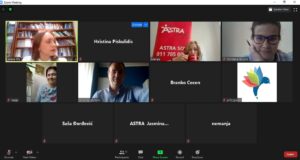 You can download the full editions of the ALARM report from the following links: SERBIAN and ENGLISH.