REGIONAL CONFERENCE “ACCESS TO COMPENSATION FOR TRAFFICKED PERSONS IN THE REGION” 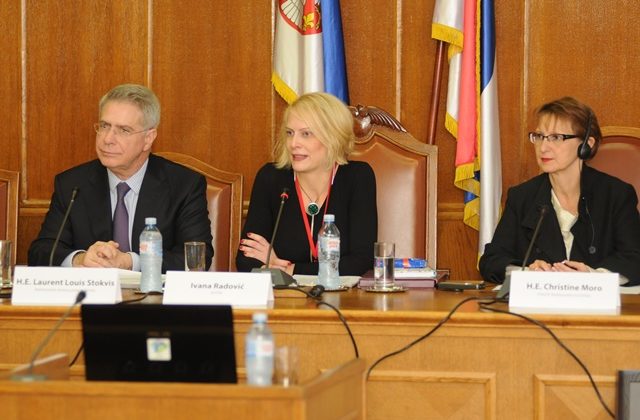 Summary and conclusions by Marjan Wijers

This conference is a final activity of the regional project “Balkans ACT (Against Crime of Trafficking) Now!“ that has been implemented in the last two years with support of the European Union (IPA CSF), the Royal Netherlands Embassy in Serbia, the Embassy of France to Serbia and the Open Society Foundation.

Experts in the area of human rights and rights of trafficked persons from France and the Netherlands – lawyers Anne Bouillon and Annet Koopsen, as well as a former judge and current legal advisor at the Ministry of Justice Charles Tellier and the Chair of the Commission of the Dutch State Compensation Fund Ludo C.P. Goossen gave the examples from practice that may serve as recommendations for building a realistic legal framework and systemic measures that would ensure effective access to compensation for victims in the countries in the region. “Until recently, a victim of trafficking in France was out of the focus – all the attention was on the perpetrator. Fortunately, that has changed. Now victim is in the center of interest”, said Anne Bouillon, lawyer from Nantes.

In the session on possible strategies and solutions to improve access to compensation for trafficked persons, lawyer Aneta Trajkovska talked about the practice of deciding on victims’ compensation claim in criminal proceedings in Macedonia. Radmila Dragičević Dičić, judge of the Supreme Court of Cassation of Serbia and Slobodan Josimović from the Novi Sad Higher Prosecutor’s Office presented recommendations for improving access to compensation for victims of violent crimes produced by ASTRA’s group of experts. Dr Eldan Mujanović from the Faculty for Criminal Justice, Criminology and Security Studies (University of Sarajevo) discussed possible solutions for overcoming challenges in this area in Bosnia and Herzegovina and Munir Podumljak from the Partnership for Social Development presented possible solutions for improving compensation system in Croatia.

Having listed positive steps made in the Republic of Serbia in the previous years, Tamara Vukasović, president of ASTRA and coordinator of the BAN project closed the conference “Access to Compensation for Trafficked Persons in the Region” with hope that more will be done in the anti-trafficking field in the future and that trafficked persons will always be observed in the context of human rights.

Giving comparative overviews of different models in the region, the speakers presented how the access to compensation for trafficked persons is regulated in their respective countries and the existing legislation within which it is possible to realize right to compensation. Dutch independent expert Marjan Wijers presented international standards in the area of compensation and different mechanisms for access to compensation for trafficked persons. Challenges identified in this area in the region were discussed by Hajrija Hadžiomerović-Muftić, prosecutor of the Prosecutor’s Office of the Federation of Bosnia and Herzegovina, prof. dr Milan Žarković from the Academy for Criminalistic and Police Studies (Serbia), Munir Podumljak from the Partnership for Social Development (Croatia) and Jasminka Friscik from theAssociation for Emancipation, Solidarity and Equality of Women (Macedonia).

– Compensation in criminal proceedings in Macedonia according to CPC and LRC – Aneta Trajkovska, lawyer, Macedonia

– Policy paper “Compensation for Trafficking Victims in the Netherlands”