REPORT ON HUMAN TRAFFICKING IN SERBIA FOR THE PERIOD 2000-2010 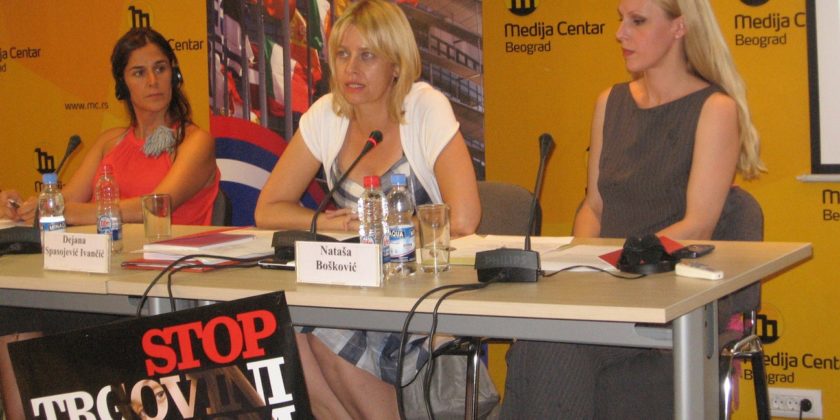 On 14 July 2011 in Media Center Belgrade ASTRA presented its Report on Human Trafficking in Serbia for the period 2000-2010. The Report has been created by a group of authors and associates who have been involved in the monitoring and analysis of different aspects of this complex social problem. The Report has been created with the support of the European Union (EIDHR) and OAK Foundation. It is published in Serbian and in English in both printed and electronic form. Representative of the Delegation of the European Union to the Republic of Serbia, representative of ASTRA and ASTRA’s lawyer addressed the audience. During the months of July, August and September, the Report has been cited in numerous Serbian and foreign media brining attention and initiating debate on human trafficking in the public and among relevant experts. The Report has the cataloguing in publication of National Library of Serbia.

Besides the analysis of modalities of incorporation of the two most relevant international documents – UN Palermo Protocol and Council of Europe’s Convention on Action against Trafficking in Human Beings in domestic legislation and solutions it envisages, a great portion of the report is dedicated to the analysis of the practice which ASTRA as a civil society organization has witnessed from the very beginning of its work. The Report contains six annexes: report on ASTRA SOS Hotline 2002-2010; maps of recruitment points in Serbia and human trafficking routes across Serbia and Europe; the results of a survey on citizens’ perception of human trafficking in Serbia; the report on the Serb’s labor exploitation case; the report of discovered trafficking cases and activities undertaken by the police and social welfare centers in 2010 in towns where ASTRA Network member organizations operate.

Compared with 2000, the situation regarding the anti-trafficking mechanism in Serbia is improved significantly. However, it is far from the level of effectiveness and efficiency which we have aspired and hoped for when we started in 2000. Changes that are the most visible and easiest to measure refer to the legal framework for criminalization and punishing for human trafficking. Until 2003, Serbian criminal legislation did not recognize human trafficking as a criminal offence. At that time trafficked women who were foreign nationals were mostly sentenced to jail for engaging in prostitution and/or were deported to the country from which they entered Serbia without any regard to their safety either during deportation or at the destination of return. Since the first criminalization of human trafficking, the definition of the offence changed several times, as well as punishments.

The Report contains both general and specific recommendations in the area of legislation, prevention and victim protection.

The majority of data have been gathered through ASTRA SOS Hotline, which has been operational since March 2002 as the only hotline service specialized for assistance for victims of human trafficking. More than 13,000 calls have been received in this period and 360 trafficking victims were identified and/or assisted, mostly girls and young women exposed to sexual exploitation; children account for 38% of all victims assisted by ASTRA.