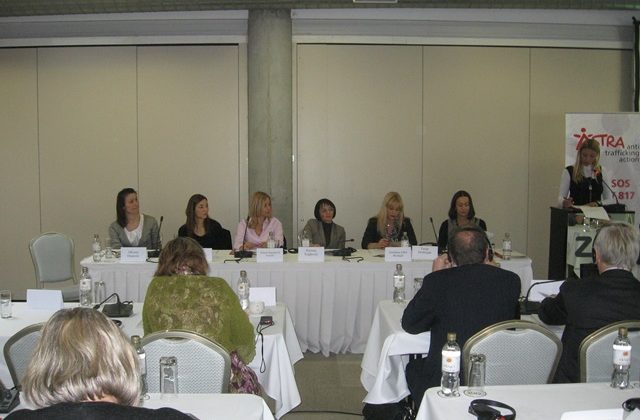 ASTRA and the Netherlands Helsinki Committee held roundtable “Promotion of the Rights of Trafficked Persons in Serbia with Emphasis on Legal Support – A Human Rights Based Approach” in Belgrade on November 28, 2012.

The participants of the roundtable were first greeted by the Dutch Ambassador H.E. Laurent Stokvis, Harry Hummel, director and Ian de Jong, president of the board of the Netherlands Helsinki Committee and Marija Anđelković, president of ASTRA.

The discussion in the round table “Promotion of the Rights of Trafficked Persons in Serbia with Emphasis on Legal Support – A Human Rights Based Approach” took place in two panels.

The first panel focused on the treatment of Victims of trafficking and access to justice. The discussion built on the results of the analysis of judicial practice in regards to trafficking offences. The analysis was conducted for the needs of this project by lawyer Tanja Drobnjak. Besides the author of the analysis, experts who talked about this topic were Dejana Spasojević Ivančić, attorney, Gordana Jekić Bradajić, Deputy Prosecutor of the Appellate Prosecutor’s Office in Belgrade, Zorana Trajković, judge of the Belgrade Higher Court, Biljana Slavković, psychodrama therapist and ASTRA’s associate and Olivera Otašević, coordinator of ASTRA SOS Hotline and Direct Victim Assistance programme.

The second panel discussed the issue of efficient compensation for trafficking victims, current practice and proposed solutions for improving access to compensation in Serbia. This panel was moderated by Marija Lukić, expert in the area of violence against women. Other panelists were Tijana Kostić, attorney, Slobodan Kostić, Deputy Prosecutor in the Basic Prosecutor’s Office in Zrenjanin, Biljana Sinanović, judge of the Supreme Court of Cassation and  Tamara Vukasović, ASTRA’s co-cordinator.

This event brought together all lawyers from ASTRA’s network of lawyers formed as a result of this project, as well as representatives of the judiciary, prosecutor’s offices, police, international and nongovernmental organizations who, thanks to their knowledge and experience gave quality contribution to the discussion on access to justice for trafficking victims in Serbia and to formulating recommendations for its improvement.

Round table “Promotion of the Rights of Trafficked Persons in Serbia with Emphasis on Legal Support – A Human Rights Based Approach” was a final activity of the project “Protection of Trafficking Victims’ Rights through the Provision of Legal Assistance” which ASTRA and the Netherlands Helsinki Committee were implementing for the last three years with support of the Dutch Ministry of Foreign Affairs through MATRA programme.

Conclusions and recommendation drawn by the participants in the round table, as well as the conclusions of three-year intensive work on promoting access to justice for trafficking victims were presented at a press conference in Belgrade on November 30, 2012 to mark December 2 – International Day for the Abolition of Slavery. The results of the case law analysis conducted based on the results of monitoring trials in connection with human trafficking and the analysis of judgments rendered for this offence since 2005 were resented on this occasion, too.