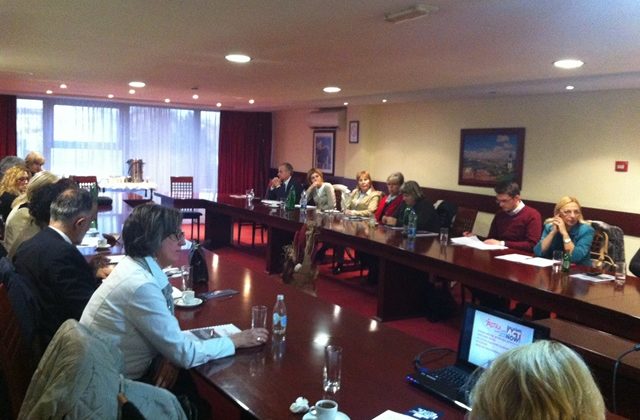 As part of the effort to improve access to compensation for victims of trafficking and other violent crimes, ASTRA organized three round tables – in Novi Sad (December 2014), Niš (December 10, 2014) and Belgrade (December 12, 2014).

For more than ten years, ASTRA has been working on the improvement of the position of trafficked persons with emphasis on access to justice. To that end, a group of experts was formed last year whose task was to analyze current situation in the Republic of Serbia in the area of effective access to compensation for trafficked persons and victims of other violent crimes, examine good practices in the world and formulate proposals for the situation in this area to become better.

The experts’ group produced, inter alia, a proposal of amendments to the Criminal Procedure Code which should improve the procedure for effective access to compensation for victims, as well as a proposal of guidelines for the acting of judicial authorities relating to compensation in criminal proceedings. They also created a proposal for the establishment of a compensation fund for victims of violent crimes as one of the models for more effective realization of this right in practice.

Guidelines for the acting of judicial authorities relating to compensation in criminal proceedings set up an order of measures which a public prosecutor and a judge should take within the existing legal framework for the victims to be able to realize their right to compensation in criminal proceedings and for the purpose of greater level of protection of victims. This initiative would help overcoming the problem observed in the practice of criminal courts which do not decide on the compensation claims of victims of violent crimes for the reason of possible prolongation of the proceedings, but refer the victims to litigation instead.  Such practice does not comply with the principles of efficiency of proceedings, right to a fair trial and right to an effective remedy. It also fails to comply with specific obligations arising out of the conventions and other international/regional documents which regulate minimum standards for the realization of guaranteed rights of victims.

Legal grounds for changing current practice of courts and prosecutor’s offices aimed at deciding on compensation claim in criminal proceedings lies in accepted international standards, international conventions which the Republic of Serbia signed and/or ratified, as well as in the EU rules in the area crime victims’ rights: in future, regulations of the Republic of Serbia will have to be intensively harmonized with those rules.  The aim of changes of acting of judicial authorities is harmonization with standards and rights set up in the European Convention on the Compensation of Victims of Violent Crimes, Council of Europe’s Convention on Action against Trafficking in Human Beings, Council of Europe Convention on Preventing and Combating Violence against Women and Family Violence, UN Convention against Transnational Organized Crime and Protocol thereto to Prevent, Suppress and Punish Trafficking in Persons, especially Women and Children and the UN Declaration of Basic Principles of Justice for Victims of Crime and Abuse of Power. Also, with regard to EU mechanism, of great importance is the Directive establishing minimum standards on the rights, support and protection of victims of crime which came into force on November 15, 2012.

Round tables brought together around 75 judges of basic, higher and courts of appeal, public prosecutors and deputy public prosecutors from basic, higher and appellate prosecutor’s offices, lawyers and representatives of NGOs which provide different forms of assistance to victims of crime. Through dynamic discussion, the stakeholders shared their experiences and views of the existing practice regarding access to compensation in criminal and civil proceedings and challenges that prevent better functioning of the system, as well as their opinions about presented guidelines.