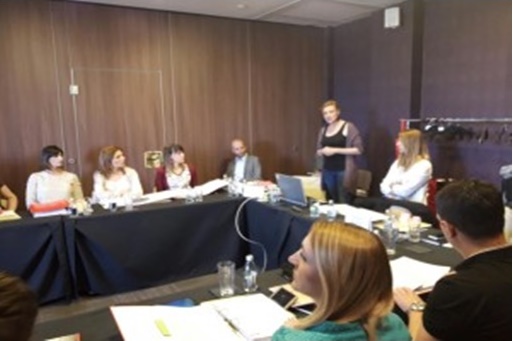 With the support of the Royal Netherlands Embassy in Serbia and in cooperation with the Republican Prosecutor’s Office, ASTRA is implementing the project “Enhancing Capacities of Newly Established Judicial Witness/Victim Support Services”. This project is aimed at training and supporting witness/victim support service in courts and prosecutor’s offices in Serbia and Montenegro so that they can provide quality support to victims of family violence, trafficking in human beings and crimes against sexual liberties.

Within this project, a two-day seminar titled “Support to Witness/Victim Support Services – Psychological First Aid and Referral” was held in Belgrade on May 29-30, 2017. There, persons responsible for providing information and support to witnesses/victims from selected higher courts and higher prosecutor’s offices from Serbia had an opportunity to learn more about communication with witnesses/victims with special emphasis on the psychological consequences of human trafficking and domestic violence, as well as to practice skills they gained in seminars they attended so far.  Further, the seminar gave them a chance to exchange their experiences with colleagues who had been active in this area for a longer period of time, having in mind that witness/victim support services at higher prosecutor’s offices have been established and trained only recently, while those at higher courts have been operational for several years. Special attention has been paid to presenting organizations that provide long-term support to the victims of a different type of criminality to which judicial services may refer their beneficiaries. The last session was dedicated to the issue of burnout and skills to prevent it, which is of particular importance for persons performing this complex duty.