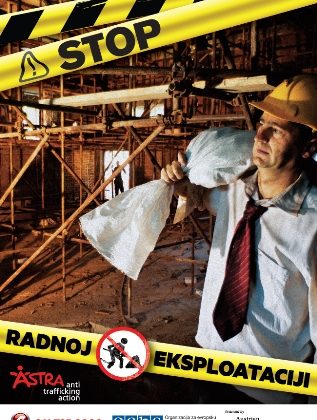 At the construction site of the Centre, there were metal containers where the SerbAz headquarters used to be. One of the containers was used as a prison on several occasions. One worker was kept overnight and beaten up there…. Violence was mostly directed at those workers who organised negotiations with company’s management and who were actively fighting for their rights and rights of their colleagues (ASTRA SOS Hotline database).

After the fall of the Berlin wall, the bipolar order of the second half of the 20th century was replaced with a complex disorganization of the world, accompanied by the growth of inequality, the peripheralization of regions and civil wars. At the same time, globalization has enabled quick move and flight of capital, while capital mobility causes decrease in the price of labour force. In Serbia, all of these was accompanied by the transformation of self-management socialism into capitalism and a shift from collectivist to individualistic values. Dominant values which primarily result from the manner of economic organisation of society determine whether the fact that someone (was) exposed to human trafficking for the purpose of labour exploitation will be interpreted as the responsibility of an individual-victim, an individual-exploiter or a society in question.

An increasing number of cases of trafficking in human beings for the purpose of labour exploitation should be observed in the context of structural position of workers in general. The ultimate goal of labour in capitalism is the production of surplus value, that is, profit through the exploitation of labour of workers by the employer (regardless of the way in which legal or formal status of employment is regulated); the ultimate goal of human trafficking is generation of profit for traffickers through the exploitation of victim[1]. Human trafficking also follows the law of supply and demand. On one hand, unemployment, poverty, social exclusion, wars, political instabilities, domestic violence, social marginalisation push people, in search of better life or just struggling to survive, to seek job, continue education, or build a better life in another city or country; on the other hand, in the era of globalization, there is a growing demand for cheap commodities, cheap labour and cheap services in developed and wealthier countries

It is important to differentiate between slavery as legal institute of certain historical periods and trafficking in human beings which is today criminalized at an international level. The very consent of the person to exploitation or to the establishment of slavery-like or similar relations does not affect the existence of the crime. The goal of human trafficking is to generate profit through exploitation, regardless of its form: sexual exploitation, forced labour, forced begging, coercion into crime, illegal adoption, forced marriage, organs trafficking. One of the traditional stereotypes is that traffickers use victims for sexual exploitation only and that only women and girls are at risk. The majority of victims of labour exploitation identified in our country are adult men of different educational profiles and age, at the construction sites abroad.

ASTRA registered the first case of labour exploitation in 2005. According to ASTRA SOS Hotline, since then, every sixth person assisted within ASTRA Direct Victim Assistance Programme has been recognized as victim of labour exploitation. The pattern is usually the following: workers, encouraged and motivated by positive personal experience of others and by possibilities to earn more than they would in Serbia, accept, without checking, job offers made by registered companies, the agencies which are often not licensed for job brokering or by acquaintances. During the trip or on the destination, traffickers take away their documents, usually under the pretext of regulating work permit. Workers usually sign in advance suspicious or invalid contracts or contracts in a foreign language, previously paying a non-refundable amount of money, allegedly for covering the costs of regulating work status. The loss of legal identity because of unregulated documents and confiscated passports, unpaid labour and threats to be reported to the police put workers in the position not to be able to break this relationship and leave the employer.

In the course of exploitation, traffickers use different forms of violence. Physical violence is not always involved, but victims are controlled by the use of psychological violence, threats, manipulations and lies. Every form of human trafficking imply different ways of the control of movement. Victims may be kept in isolation, but even if they are not and if they are free to move, this is still human trafficking, because of the very fact that fear for one’s safety or the safety of one’s family is an effective control mechanism.

It is because of being identified as harassment at work that many cases of labour exploitation are not recognized as a specific form of exploitation. The case of workers in the Yura factory, which marked year 2016 when it comes to the violation of workers’ rights, has shown the extent of normalization of neoliberal capitalism in Serbia, with authorities clearly siding with the employer, even after it was confirmed that the employer gave automobiles to the Labour Inspection as a gift and that the Labour Inspection did not find any irregularities in company’s work. Such reaction of authorities causes citizens’ mistrust in institutions and exposes corruption of the system, at the same time relativizing harassment, abuse of workers’ rights and the most extreme forms of exploitation relative.

Normalisation of exploitation – which results in labour exploitation generally not being recognized legally or, when recognized as the violation of rights, the reaction of relevant social actors is missing – makes workers who survived human trafficking see themselves primarily as workers deprived of their rights. Such absence of distinction is a consequence of a continuum of exploitation of all workers, both in the country of destination and in the country of origin, in this case Serbia. The experience of irregular workers is that, even when discussed in public, their work is not treated as a question of existential need, but as conscious and deliberate violation of law. On the other hand, the cases such as the Yura factory in 2016 or Goša workers[2] in 2017 show that even workers in the legal and regular sphere of labour are not protected. In that respect, instead of focusing on individual cases which are represented as inhumane treatment of workers by an individual, it is necessary to contextualize, politically act and react to the question of labour, labour rights and human trafficking for the purpose of labour exploitation as the most extreme form of exploitation and a systemic problem of capitalism.

In 2008, ASTRA contracted TNS Medium Gallup to conduct a survey on perception and understanding of the problem of human trafficking on a representative sample of the citizens of Serbia. What was recognized in citizens’ attitudes is the valuation of ways in which people make their earnings. Compassion and empathy are historically changing integral elements of various hegemonic epochal consciousnesses from the Ancient times, over socialist humanism up to contemporary philanthrocapitalism which impose moral and political consciousness of the age we live in. Following post-socialist transformation, states on the periphery of capitalist system like Serbia compete who is going to create “more favourable climate for foreign investors”[3] by dumping the price of labour force and maintaining high unemployment so that having a job becomes a privilege. In such atmosphere, forcing unions and workers to consent to the conditions dictated by authorities is called social dialogue. At the same time, at the micro level, guilt for of a need of “easy money” of people who fall victim to human trafficking, which is actually the most extreme form of the exploitation of labour, is attributed to them instead to those who put them in such situation by means of governing policy.

Paradoxically, at the moment when claiming basic rights at work in Serbia is treated as anachronous and outdated, of socialistic spirit and redundant, because people are satisfied if they have any job at all, hence, due to the normalisation of unemployment typical for peripheral capitalism, the problematizing of human trafficking for the purpose of labour exploitation opens the space for returning the issue of exploitation question into public speech. This is particularly important today in view of announced changes of the Labour Law, especially having in mind that, after this Law came into force, it has turned out that the flexibilization of labour effectively leads only to easier termination and not to easier employment; further, other regulations in relation to labour and employment are not applicable in practice in light of citizens’ need for labour migration. Political response of neoliberal, right-wing and centrist actors do not bring fundamental solution as it does not question the economy. Anti-trafficking campaigns must draw attention to different forms of oppression and inequalities and, in that respect, connect with other fights addressing labour rights and exploitation.

The whole publication is available here.

[1] For details about trafficking in human beings and data presented in the paper, see www.astra.rs