War on Ukraine responsible for surge in missing children cases 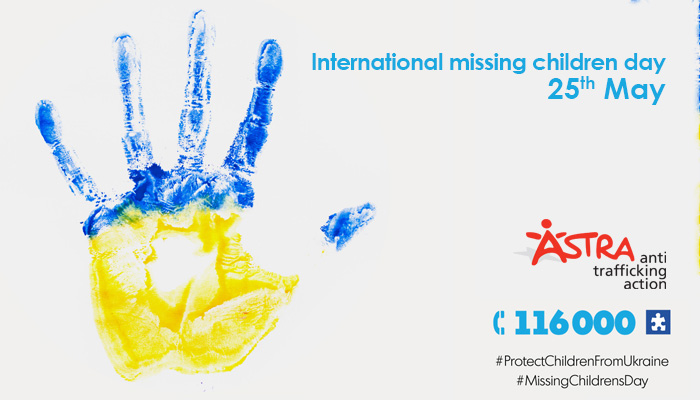 Brussels, 25 May 2022 – 25th May marks International Missing Children’s Day. On this occasion, Missing Children Europe draws attention to the impact of the Russian war in Ukraine, which has put thousands of children at risk of violence, trafficking, sexual abuse and exploitation, and going missing.

Today, Missing Children Europe launches a report on children reported missing in Ukraine during the first 60 days of the war and calls on the EU and Member States to provide support and protection to all children and families (at risk of) going missing due to the war.

During the first two months of the war on Ukraine, NGO Magnolia, the 116000 hotline operator in Ukraine, recorded an enormous increase in the reports of missing children. More than 2100 cases of children going missing inside Ukraine were reported due to war related activity (compared to 182 cases reported to the hotline during peace time in 2020). Among those cases, there are 15 cross-border cases of children going missing while seeking safety in the EU. A portion of these missing cases is simply due to temporary loss of contact because of damage to infrastructure, but a significant number of cases remains unresolved.

According to the Office of the Ukrainian Ombudsman, 232 children have been killed and 427 children were injured since the beginning of Russia’s invasion of Ukraine. The total number of Ukrainian children, who physically suffered during the conflict, is impossible to ascertain.

Thanks to cross-border cooperation and the support of Missing Children Europe and its member network of 116 000 hotlines, several Ukrainian children who went missing as they were fleeing to safety in the EU, have been found safe and sound, and were reconnected to their families.

Missing Children Europe calls on Member States, and the EU, to take responsibility to ensure the protection of children’s rights both in Ukraine and in the EU to ensure all children are eventually safely reunited with their families. Investment in the capacity of the 116000 hotline in Ukraine and in neighbouring countries is needed to help find all the children and families who went and still go missing due to the war.

“Much more needs to be done to support all Ukrainian children at risk of going missing and to reunite them with their families is long. The EU and Member States need to take responsibility for children on their territory and develop common standards on registration of these children at the borders, as well as follow-up during the period of temporary protection. We also need strong investment in cross-border cooperation to help missing children organisations locate unaccompanied minors fleeing the war in Ukraine.”